Diphenhydramine is a first-generation ethanolamine antihistamine developed by George Rieveschl and was approved for usage in 1946.

In the U.S. and Canada – diphenhydramine is the primary active ingredient in the over-the-counter medication “Benadryl.”

As of 2017, diphenhydramine was the 241st most commonly prescribed medication in the U.S. – exceeding 2M prescriptions.

Total usage of diphenhydramine is likely greater than the number of prescriptions would suggest given that it is sold over-the-counter (OTC).

However, because it is sedating, many wonder how well it works for the enhancement of sleep and management of insomnia. 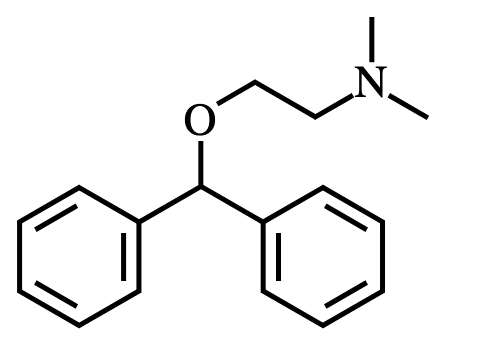 Diphenhydramine induces a sedative/hypnotic effect primarily by acting as an inverse agonist at the H1 histamine receptor site.

In other words, it binds to H1 receptors and induces a pharmacological effect the opposite of a conventional H1 agonist.

Inverse agonism and blockade of H1 receptors in the cortex and ventrolateral preoptic (VLPO) nucleus in the hypothalamus turns the sleep-wake switch “off.”

The absence of the stimulating effect of histamine in these regions promotes sedation and subsequent sleep.

This facilitates an “anticholinergic” effect – blocking the action of the stimulatory neurotransmitter “acetylcholine.”

Diphenhydramine appears to modulate activity of 5-HT2A receptors and, to a lesser extent, 5-HT2C receptors.

The degree of serotonergic modulation is dose-dependent such that low doses won’t influence these receptors much.

Included below are some studies that examined the effect of diphenhydramine on sleep or for the treatment of insomnia.

There haven’t been many quality placebo-controlled RCTs evaluating the efficacy of diphenhydramine for the treatment of insomnia or the enhancement of sleep (just 3 studies met inclusion criteria for this systematic review).

Because the data are limited here, it’s difficult to know how effective diphenhydramine truly is for the treatment of insomnia – particularly over a long-term.

Culpepper & Wingertzahn noted “limited beneficial effects” meaning diphenhydramine might be efficacious to some extent – but they aren’t entirely sure.

Moreover, researchers stated that there’s a lack of evidence to confirm the safety of diphenhydramine usage for insomnia.

Perhaps there are specific “safety” concerns relevant to insomnia treatment, however, diphenhydramine is considered safe enough to be sold “over-the-counter” sans prescription.

In healthy men there doesn’t appear to be significant benefit on sleep parameters from taking diphenhydramine on an intermittent basis.

Additionally, there appear to be significantly more negative effects associated with diphenhydramine such as: (1) higher next-morning/next-day sleepiness & (2) greater psychomotor impairment – relative to both placebo and zolpidem.

Lastly, diphenhydramine appears to alter REM sleep by (1) increasing REM latency and (2) reducing % of REM sleep – whether this is detrimental to health remains unclear.

Glass et al. (2008): “Temazepam is more effective than diphenhydramine when compared with placebo at the doses tested, although this advantage is mitigated by the risk of falls associated with temazepam use.” (R)

Morin et al. (2005): “The findings show a modest hypnotic effect for a valerian-hops combination and diphenhydramine relative to placebo.” (R)

Among psychiatric patients with insomnia, diphenhydramine effectively reduces the insomnia at dosages of 12.5 mg, 25 mg, and 50 mg.  Its effect seems most robust in patients who hadn’t received previous treatment for insomnia.

Although “dependence” was not observed, it’s possible that 2 weeks was too short to detect dependence.  Note: Dependence is NOT the same as tolerance – but researchers in this study defined it similarly.

It’s possible that ongoing treatment with diphenhydramine generates some degree of tolerance – particularly when used for longer than 2 weeks.

One relevant question to ask is why didn’t patients previously treated for insomnia respond as well as treatment naïve patients to diphenhydramine?

The answer is unclear but may be due to: (1) cross tolerance to diphenhydramine via usage of other medications (such as via H1 receptors) OR (2) significantly less severe insomnia due to getting it under control with prior treatment such that robust improvements were less noticeable.

It’s important to note that there are limitations associated with this study. Most significant limitations include: zero placebo control & zero objective measurements of sleep quality (e.g. with polysomnography).

Borbely & Youmbi-Balderer (1988): “Diphenhydramine caused neither an impairment of psychomotor performance in the morning nor a rebound insomnia in the following night.” (R)

Rickels et al. (1983): “This study supports the use of 50 mg diphenhydramine as an OTC sleep aid in the treatment of temporary mild to moderate insomnia.” (R)

Perhaps the combination of naproxen sodium (440 mg) & diphenhydramine (50 mg) is more effective than standalone diphenhydramine for the treatment of insomnia associated with dental impaction pain.

This makes logical sense given that naproxen sodium targets the pain and diphenhydramine induces a sedative/hypnotic effect.  There could theoretically be some additional sleep enhancing effect from naproxen sodium via lowering inflammation – but this is unlikely significant.

Overall the results of this study make logical sense: painkiller + hypnotic = helps with transient insomnia resulting from dental pain more than either as a standalone.

Seems like an unnecessary study to me given the fact that these were predictable outcomes, however, this substantiated the combination’s clinical safety and efficacy.

Does this prove that standalone diphenhydramine is ineffective for insomnia? No. It just shows that among patients with “pain” (resulting from something like a dental procedure) – it’s necessary to treat the pain (naproxen) while inducing sleep with a hypnotic (diphenhydramine).

This is beneficial in the sense that we know naproxen is safe with diphenhydramine unlike other common pain-reducing agents (e.g. acetaminophen).

What’s the scientific consensus of diphenhydramine for sleep?

There haven’t been many high-quality studies investigating the safety and efficacy of diphenhydramine for the enhancement of sleep or the treatment of insomnia.

A systematic review concluded that there is no robust scientific evidence to support the clinical safety and efficacy of diphenhydramine for the treatment of insomnia.

Benefits reported in a couple of isolated studies included: increased sleep efficiency and fewer nighttime awakenings – relative to placebo. However, these “benefits” weren’t replicated in other research.

Other studies found that diphenhydramine was no better than a placebo in the treatment of insomnia or in the modulation of sleep architecture.

Moreover, because diphenhydramine: (1) caused significantly more adverse events (e.g. next-day psychomotor impairment) than a placebo control; (2) has numerous interaction with other drugs & medical contraindications; (3) may induce rapid tolerance onset; and (4) may not be safe long-term (e.g. increased dementia risk) – it cannot be clinically endorsed as a useful intervention for insomnia or as a sleep enhancement agent.

What’s the maximum effective dosage of diphenhydramine for sleep?

According to research by Kudo & Kurihara (1990), there’s zero additional hypnotic benefit derived from administration of diphenhydramine above a dosage of 50 mg. Dosages above 50 mg also caused significantly more adverse events.

There’s no “optimal” dosage of diphenhydramine for sleep (this is somewhat individualized). One study found relatively similar benefit of diphenhydramine at 12.5 mg, 25 mg, and 50 mg – with slightly greater benefit at 50 mg than the other 2 intervals.

Research suggests that dosages of diphenhydramine up to 50 mg are relatively effective and safe for individuals without medical contraindications when used as directed.

How I discovered diphenhydramine for sleep & insomnia…

I accidentally discovered how well diphenhydramine can work as a sleep aid while dealing with some sort of skin allergy.

I had extremely itchy skin following usage of a new laundry detergent and took 25 mg diphenhydramine.

Within the hour I became sedated/zombified despite the label reading “non-drowsy” (LOL).

When I woke up the next morning, over 8 hours had passed and subjectively I felt as though it was the best sleep I’d gotten in years.

The one thing I can say though is that it can cause some super weird dreams… (or at least in my experience it does).

I have dreams that somehow manage to incorporate people from childhood that I would’ve otherwise never thought about.

How I use diphenhydramine for sleep…

~1 hour before sleep time: Seems to kick in within 30 minutes for me and I become extremely sedated within 45 minutes such that I want to sleep. (This effect is NOT the same if I’m caffeinated though.)

Meditation & relaxation: While using diphenhydramine I like to engage in relaxing activities like meditation in bed if my goal is sleep. Overuse of electronics (e.g. cell phone, computer, etc.) may interfere with sleep onset in some cases.

Lowest effective dose: For me the lowest effective dose of diphenhydramine for sleep is 25 mg. I’ve tried both 6.25 mg and 12.5 mg and neither delivered a significantly beneficial effect.  I have not tested doses above 25 mg because I have no reason to – the 25 mg works fine.

Standalone: No caffeine, no alcohol, no melatonin, etc. I do NOT use any other medications, drugs, or supplements on the same day as taking diphenhydramine. I have occasionally tried diphenhydramine on days when I drink too much caffeine and it does NOT work as well. I’ve also tried mixing it with other agents like melatonin and valerian, etc. – but it doesn’t work nearly as well in this case either (for me at least).

Should you use diphenhydramine for sleep & insomnia?

Ask a medical doctor whether it’s safe and/or likely to be effective for your specific case.

If you require pharmacological intervention for insomnia – there are many other (arguably superior) options to consider [including H1 inverse agonists/antagonists if these are your preference].

Have you used diphenhydramine for sleep & insomnia?

If you’ve tried diphenhydramine for sleep or use it often, consider sharing a comment about your experience.

Next post: Alprazolam (Xanax) for Sleep & Insomnia: Why I Use It Occasionally

Previous post: Insomnia After COVID: Will It Ever End?