Nasopharyngeal reflux (NPR) is a medical diagnosis that is seldom utilized in present day – given the fact that most experts prefer the term “laryngopharyngeal reflux” (LPR) coined by Dr. Jamie Kaufman (MD).

What is nasopharyngeal reflux (NPR)?

Nasopharyngeal reflux is a highly specific type of reflux wherein the symptoms primarily affect the nasopharynx (the upper part of the throat a.k.a. pharynx – the area behind the nose).

Nasopharyngeal reflux is defined as: the retrograde entry of saliva, food, or liquid into the nasopharynx during swallowing – usually due to palate weakness or dyscoordination. (R) 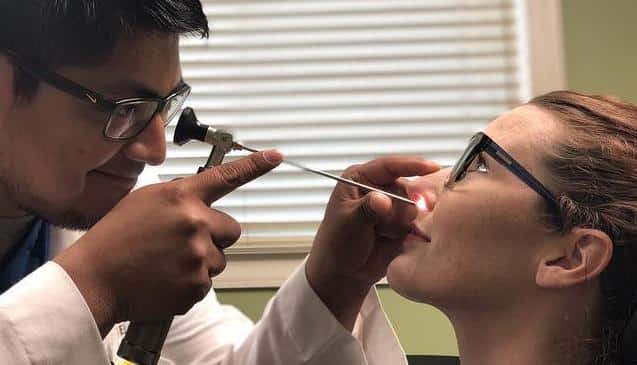 Listed below are some of the more common symptoms associated with nasopharyngeal reflux.

Difficulty breathing through nose: Individuals with NPR may experience “airway resistance” when breathing through the nose. Even if the nose contains zero mucus – there’s usually inflammation that interferes with efficient nasal respiration.

Stuffed nose: NPR can cause stuffed nose due to a combination of intranasal mucus membrane dysfunction, altered/increased mucus production, and/or inflammation resulting from refluxed acid within the nasopharynx.

Voice changes: Nasally sounding, crackling, raspy/dry, difficulty speaking clearly, etc. Many will notice a change in their voice with NPR due to inflammation within the nasopharynx and laryngopharynx.

Bloody nose: Some individuals will develop a bloody nose due to refluxed materials damaging mucus membranes and/or interfering with normal mucus production – such that the nasal canal dries out. Blowing the nose frequently as a result of it being plugged could also cause bleeding.

Burning sensation in nasopharynx: Some may notice a significant “burning sensation” within the nasopharynx or tangential areas such as the laryngopharynx. This burning is usually a result of irritation from acid exposure.

Postnasal drip: Nasopharyngeal reflux can cause postnasal drip due to increased mucus production in response to acid-related irritation in the nasopharynx.

Globus sensation: This is the feeling that something is eternally stuck in your throat and won’t go away no matter how many times you swallow. (Some refer to globus as “foreign body sensation” in the throat).

Coughing: Some individuals will develop a throat tickle that causes them to cough chronically. The cough will usually be non-productive (such that there won’t be significant mucus as there is during an infection).

Popping, crackling, ticking sounds: Some individuals will notice popping, crackling, or “ticking” sounds from within the nose, throat, or ears – usually due to a combination of inflammation, trapped air, drainage (mucus or refluxate).

Sinusitis & sinus pressure/pain: Sinusitis simply means inflammation of the sinuses – and it can be caused by an infection, but also other things like allergies and even nasopharyngeal reflux. Sinusitis can make it difficult to breathe through the nose and may be accompanied by pressure and/or pain in specific sinuses.

After you’ve consulted appropriate doctors – these professionals should help you come up with a custom treatment plan based on your current health status, health history, and presenting symptom severity.

In some cases, nasopharyngeal reflux can be significantly improved or cured with one or more treatments below. For example, select individuals with allergies causing the condition can simply eradicate/remove the allergens and symptoms resolve relatively quickly.

H2 blockers: Although less potent than PPIs, H2 blockers also reduce stomach acid and are particularly effective at night. The main drawback is that tolerance to H2 blockers builds rapidly (usually in less than ~2 weeks).

Head-of-bed elevation: Some individuals only experience NPR while lying down at night during sleep. Elevating the head of the bed (6+ inches) might reverse this condition for some people.

No eating within 4 hours of bed: Eating late at night is problematic in that food is digested less efficient at night (circadian-digestive changes) and while lying down to sleep, gravity is no longer on your side to keep the food in your lower stomach. As a result, you’ll end up with more undigested food, stomach acid, and gaseous contents back-flowing up the esophagus to reach the nasopharynx.

Low acid diet: Highly acidic foods are problematic in that they increase stomach acid and may reactivate pepsinogens within the nasopharynx during consumption.

Alginate suspension: Alginate suspension formulas like Gaviscon Advance, Reflux Gourmet, etc. can be helpful in some cases when administered after each meal. How? They form a “raft” or “barrier” to protect the nasopharynx from an onslaught of refluxate (e.g. acids, pepsin, etc.).

Magaldrate: This is an antacid containing magnesium hydroxide and aluminum – both of which help neutralize stomach acids post-meal.

Small meals: Eat a series of 6-8 small meals throughout the day – spaced by about 1.5-2 hours. Each meal should be about the size of your fist (as this is the amount of food your stomach can hold at once prior to digestion).

Chewing gum: Evidence suggests this helps reduce acidity in the laryngopharynx after meals.

Allergy treatment (if necessary): In the event that an allergist detects any significant allergy – it is recommended to avoid the allergen (if possible) or treat the allergy (e.g. with allergy medications).

Avoid certain foods (if sensitive): Obviously avoid any foods to which you’re allergic. Even if you have a food “sensitivity” – this should be avoided as well (as non-IgE-mediated allergies can cause reflux conditions).

Melatonin: Pure melatonin (no additives) may be helpful for maintaining normal lower esophageal sphincter (LES) pressure at night – such as to reduce reflux during sleep.

Neuromodulators: Amitriptyline; baclofen; gabapentin/pregabalin; etc. Many people with NPR have neuropsychiatric comorbidities that may be causing and/or exacerbating the severity of NPR.

Drink only water: Regular water is non-acidic and is beneficial for most reflux conditions. Alkaline water may provide additional benefit in some cases via neutralizing/deactivating pepsinogens.

Saline nasal rinses: Arm & Hammer sodium bicarbonate saline rinse in the nose after each meal. Some may find this practice significantly reduces the severity of symptoms.

Fluticasone: May help some individuals with excessive intranasal swelling – particularly during sleep when the swelling may impair breathing.

Treat other medical conditions: Any anxiety, depression, insomnia, binge eating disorder, sinus infections, allergies, neurological conditions, etc. – all should be properly treated. This should be obvious, but it’s possible that NPR might occur secondary (as a downstream effect) to certain conditions.

The causes of nasopharyngeal reflux are highly individualized and vary among those diagnosed. For one person NPR may be caused by a combination of binge eating disorder and hiatal hernia – and for another it may be caused by a sleep apnea and an esophageal motility disorder.

Hiatal hernia: This is a hole in the diaphragm (hiatus) through which food and liquids pass from the esophagus into the stomach. Hiatal hernia effectively interferes with the lower esophageal sphincter (LES) such that there’s no longer a tight barrier to prevent acid from refluxing up into the esophagus. The larger the hiatal hernia, the more likely a person is to have GERD, LPR, and NPR.

Things that lead to the above “causes”…

What are the physiological reactions that occur in NPR?

Inflammation & oxidative/nitrosative stress: Occurs throughout the nasopharynx and esophagus – in response to refluxed stomach contents.

Esophageal & nasopharyngeal damage: If untreated for a long duration, NPR could cause damage within the esophagus and nasopharynx. Over a long-term, NPR may even cause esophageal or nasopharyngeal cancers.

Microbiota dysbiosis: Evidence suggests that reflux conditions cause microbial dysbiosis within the esophagus. It’s likely that esophageal and nasopharyngeal dysbiosis occur in response to NPR. Dysbiosis may impair endogenous recovery from NPR and may promote further NPR.

Abnormal mucus production/clearance: A combination of inflammation, oxidative/nitrosative stress, esophageal damage, and microbial dysbiosis – could alter mucus production and clearance which could exacerbate damage with each subsequent nasopharyngeal reflux event.

Included below are hypothesized risk factors for developing NPR.

Note: This is not a definitive or comprehensive list of “risk factors” for NPR.

Included below are papers in which “nasopharyngeal reflux” as a specific term was utilized. Although nasopharyngeal reflux is considered by most as being synonymous with LPR – it’s technically slightly different in that refluxate is reaching and affecting the nasopharynx (perhaps in addition to the laryngopharynx).

NPR & Eustachian tube dysfunction (2021): There is a clear reciprocal causal relationship between NPR and ETD – meaning that NPR can cause ETD and ETD can cause NPR. (R)

NPR & Rhinosinusitis (2005): Patients with chronic rhinosinusitis after endoscopic sinus surgery have more reflux at the nasopharynx, UES, and distal esophagus – than controls. The greatest difference is in NPR, especially pH less than 5. (R)

Have you experienced nasopharyngeal reflux (NPR)?