Patulous Eustachian tube is a specific type of inner ear disorder in which the Eustachian tube intermittently opens when it should be closed.  As a result of Eustachian tube opening, individuals with this condition may report a variety of unpleasant symptoms.  Among the most common of all symptoms associated with Patulous Eustachian tube is that of autophony – the amplification of self-generated sounds such as:  breathing, speech, and heartbeats.  In addition to autophony, you might notice crackling sounds within your ears, tinnitus (ringing of the ears), and/or ear pain (e.g. an uncomfortable suction-like sensation). 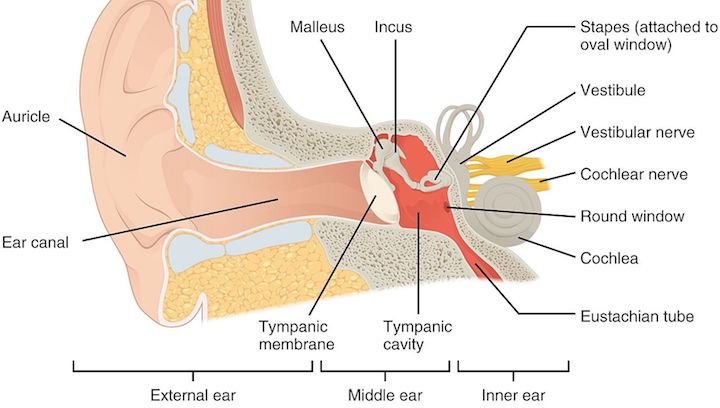 Included below is a list of symptoms associated with Patulous Eustachian tube.  Understand that if you have this condition, you’re not necessarily going to experience every single symptom on this list.  Moreover, the severity of the symptoms that you experience may differ from that of another person with this same condition.  It is also likely that some people will experience additional symptoms associated with Patulous Eustachian tube that are not documented in this article.

Note: The symptoms of Patulous Eustachian tube may occur in a single ear (unilaterally) or both ears (bilaterally).  In addition, it is possible that symptoms may vary between ears or switch ears with different episodes.  Lastly, if you’ve never been formally diagnosed with Patulous Eustachian tube, do NOT attempt to self-diagnose with this article.  Always consult a medical doctor, preferably an ENT, to rule out other conditions that may yield similar symptoms.

Estrogen + saline (Premarin): The combination of estrogen/saline nasal drops may prove useful in the management of Patulous Eustachian tube and is the most common first-line intervention.  This combination can be made by a compounding pharmacy and will typically include 25 mg conjugated estrogens in 30 mL saline.  Most patients will be instructed to administer this concoction 2-3 times per day.

Benzyl alcohol, chlorobutanol, diluted hydrochloric acid:  If Premarin nasal drops are unable to correct the Patulous Eustachian tube, other nasal medications containing benzyl alcohol, chlorobutanol, and diluted hydrochloric acid may prove therapeutically useful.  That said, these are not approved by the FDA for the management of Patulous Eustachian tube.

Weight (re)gain: If your Patulous Eustachian tube was deemed attributable to rapid or substantial weight loss, your doctor may recommend weight regain as a treatment.  Regaining bodyweight can be accomplished by consuming more calories than your body expends throughout the day.  If you have trouble gaining weight, it is recommended to track calories to ensure that you’re hitting a specific number per day to increase body weight.  Some people may not need to gain as much weight as others for normalization of the Eustachian tube.

These interventions haven’t been well-researched, however, there’s reason to suspect that they might help some individuals when used in conjunction with first-line therapies.  For most, these possibly-useful interventions are worth trying before pursuing surgery.

My experience with Patulous Eustachian tube

My first episode of Patulous Eustachian tube occurred in winter 2017 – on a very cold night (below 0 degrees Fahrenheit).  I was extremely stressed from a combination of working long hours, not getting enough quality sleep, cutting calories, trying to find a new apartment, and the holiday season.  In addition to the aforementioned stressors, I was over-exerting myself physically by lifting weights and doing high-intensity interval training.

About 45 minutes into a late-night walk, the hearing ability of my right ear suddenly transitioned from being perfectly clear to fully plugged.  This ear could only perceive internal sounds such as my breathing (which sounded very loud) and my heart beat (which was palpitating in a state of panic) thumping like a subwoofer.  It felt as though someone had shoved a suction cup and/or plunger within my left ear canal.  In addition to this suction-like sensation, I experienced acute tinnitus or ringing in the affected ear.

My left ear remained normal and could hear external sounds just fine – with no amplification of self-generated sounds.  I should note that, immediately prior to experiencing the suction-like sensation within my ear, I noticed a bit of “crackling” and “popping” – similar to what you’d hear after pouring milk into Rice Krispy cereal.  Though I hadn’t ever experienced such crackling sounds before, I figured they were attributable to the viral infection that I fought off earlier in the month.

Nevertheless, at the exact moment when my first episode of Patulous Eustachian tube occurred, it drove me into a state of panic – leading me to fear that I had experienced sudden sensorineural hearing loss (SSHL) as a result of the virus passed on from relatives that were insensitive enough to attend a Christmas gathering sick (without notifying anyone until after the fact).  In any regard, back to the episode of Patulous Eustachian tube.  Just prior to the episode I had been doing “snot rockets” to clear my sinuses.

Additionally, I had been walking in very cold weather with wicked wind chill for a reasonable duration.  Because I was wearing a poorly-crafted winter hat and never used a hood, the wind penetrated the fabric of my hat and infiltrated my ear canals – causing them to be cold.  I’m not sure whether the extreme weather conditions contributed to the Patulous Eustachian tube, but I know that the snot rockets could’ve been a major contributor.

That said, I had been snot-rocketing all winter – and most of my life – with zero prior episodes of Eustachian tube dysfunction.  For this reason, I feared that my “episode” was really sudden sensorineural hearing loss (SSNHL) and completely panicked – fearing the worst for my ears.  I jumped up and down praying that the suction-like sensation would abate and that my hearing would be restored to normal – but it never normalized during the remainder of my walk.

When I arrived home at around 10 PM, I debated as to whether I should go to the emergency room for immediate medical care.  If sudden sensorineural hearing loss, the best intervention may be immediate corticosteroid administration.  Even at home I freaked out, was yelling, jumping up and down, performing the Valsalva maneuver, etc.  As an at-home intervention, I also immediately administered high doses of Vitamins A, C, E, plus magnesium – as this cocktail is supposedly otoprotective whereby it decreases oxidative stress to preserve cilia (hair cells).

Though the magnesium helped my panic attack, I also had to do some breathing exercises to fall asleep.  The next morning my hearing seemed relatively normal – for which I was extremely thankful.  Heck, I was practically suicidal due to the discomfort and unilateral hearing loss… was driving me bananas.  I debated talking to a medical doctor about my issue and/or scheduling an appointment with an ENT, but things had normalized and I didn’t want to spend money.

Upon researching my issue, I used Google and PubMed to determine whether factors such as: a viral infection, stress, cold weather, and/or weight loss could’ve caused the symptoms I was experiencing.  Although I was convinced that my symptoms were related to the aftermath of a viral infection, I had fully recovered from the virus for at least several weeks (with no symptoms) prior to this episode.  Nevertheless, I suspected that there could be some sort of protracted or residual viral or immune effects that were influencing my ears.

Numerous episodes of Patulous Eustachian tube were documented in medical literature among individuals who had lost weight rapidly – such as from bariatric surgery.  Before this episode I was on a weight loss streak – I had lost 15 pounds in a fairly short duration through a combination of decreasing caloric intake and increasing energy expenditure.  Because my symptoms perfectly matched those associated with Patulous Eustachian tube, and I had lost a reasonable amount of weight (one of the chief causes) – I intuitively knew (i.e. had an “aha moment”) that this was the correct diagnosis.

I would later confirm my self-diagnosis with an actual medical doctor who concurred.  After my first severe episode, I realized that I had actually experienced the condition once before – in the aftermath of a 7-day water fast that I had done 2 months earlier.  That said, after my first severe episode of Patulous Eustachian tube, I would experience it a few more times – usually when I was: tweaking my body weight (via a caloric deficit), exercising hard (lifting or cardio), using caffeine, and/or highly stressed.

Have you ever experienced Patulous Eustachian tube?

If you’ve ever experienced Patulous Eustachian tube, share your experience in the comments section below.  Report what caused the condition for you – what you think and/or your doctor suspects.  Also some strategies that you’ve found successful for managing and/or fixing it.  Have you tried any of the therapeutic interventions that I discussed in this article?  Have you had any kind of surgical intervention to fix it?  Document any additional information regarding Patulous Eustachian tube that you think will be interesting, useful and/or valuable for others to read about.