Given the first law of thermodynamics, consuming fewer calories than my body expends will yield weight loss.  The greater the caloric restriction, the faster and more significant the weight loss will be.  Over the past few weeks, I’ve adhered to a relatively low calorie diet (LCD) – consuming less than 1500 calories per day.

My primary reason for implementing a low calorie diet was to determine whether it may reduce my neuropathic pain.  I have relatively severe bilateral neuropathic pain in my hands – my neurologist claims that my radial and median nerves aren’t firing properly, and that this is likely nerve pain that I’m experiencing.  Because my BMI was slightly high for my height, and because weight loss typically enhances nerve function, I implemented a low calorie diet to lose weight.

After a few weeks I’ve managed to drop from 188 lbs. to 174 lbs. (keep in mind that a large amount of this weight loss was probably “water weight” in the first week).  In any regard, the fact that I’ve been on a fairly low calorie diet sparked my curiosity and got me researching evidence-based health benefits of low calorie diets.  This led me to discovering a more extreme diet referred to as the very-low calorie diet (VLCD).  Inevitably, I wanted to write an article listing all benefits that I could find associated with lower calorie diets.

What is a low calorie diet (LCD)?

What is a very-low calorie diet (VLCD)?

Compiled below is a comprehensive list of evidence-based health benefits associated with low calorie diets (LCD) and very-low calorie diets (VLCD).  Examples of various health benefits associated with LCDs and VLCDs include: blood pressure normalization, HDL improvement, sustained weight loss over a long-term, and reversal of Type 2 diabetes (T2D).  Understand that there may be additional benefits that haven’t been discovered and/or reported within scientific literature. 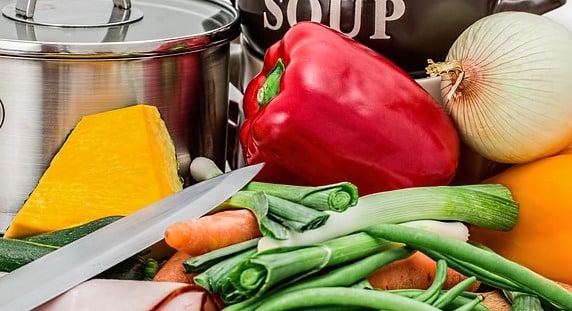 For general reference, HDL is commonly referred to as the “good cholesterol” because it scavenges and removes unfavorable “bad cholesterol” from the bloodstream.  When HDL levels increase, risk of heart disease tends to decrease.  Oppositely, when HDL levels decrease, risk of heart disease increases.  Researchers concluded that a combination of a very-low calorie diet plus weight maintenance with a low calorie diet likely favorably alters HDL cholesterol whereby risk of cardiovascular disease is reduced.

Sustained weight loss: Research shows that very-low calorie diets are effective for sustaining weight loss over an extended duration.  A paper by Saris (2001) noted that very-low calorie diets remain among the most effective long-term strategies for healthy weight management.  Because body weight is influenced mostly by caloric intake (as opposed to physical activity), it makes logical sense that restricting calories within a low range would yield the best long-term health outcomes.

It was reported that using very-low calorie diets as an initial strategy to spur weight loss yielded significantly greater weight loss when used for at least 2 consecutive months than when used for a shorter-term.  Based on these results, it’s reasonable to suspect that very-low calorie diets may be the single most optimal way to initiate a diet program for obese persons.

Included below are a list of health benefits associated with ongoing caloric restriction, which is essentially what you’re doing while following a low calorie or very-low calorie diet.  For this reason, I’ve listed additional potential benefits that may be attained by individuals who adhere to lower calorie diets over a long-term.  Understand that not everyone who follows a lower calorie diet is guaranteed to experience these hypothesized benefits.

Antidepressant: Despite the fact that very-low calorie diets have been associated with “depressive tendencies,” this association does not prove causation.  It is understood that, while initially restricting calories, many individuals experience unfavorable changes in mood such as depression and/or anxiety.  With that said, it seems as though longer-term calorie restriction may actually yield an antidepressant effect.

There are many ways by which a low calorie diet may enhance mood.  Zhang, Liu, Zhao, et al. (2015) mention possibilities such as modulation of: orexin, CREB phosphorylation, endorphins, ketones, neurotrophins, and serotonin.  Others speculate that antidepressant effects of caloric restriction are attained from decreased inflammation and oxidative stress.

Atherosclerosis: Evidence indicates that caloric restriction may protect against atherosclerosis in humans.  Research by Fontana, Meyer, Klein, and Holloszy (2004) assessed the influence of caloric restriction on atherosclerosis risk factors.  To conduct their research, 18 persons who had been adhering to a calorie restricted diet (for at least 6 years) to slow aging were evaluated and compared to 18 age-matched controls (persons who had been following the standard western diet).

Comparisons indicated that serum total cholesterol, low-density lipoprotein cholesterol, ratio of total cholesterol to HDL-C, triglycerides, fasting glucose, fasting insulin, C-reactive protein, PDFG-AB, and blood pressure (both systolic and diastolic) – were substantially lower among the caloric restriction group.  The intima-media thickness (IMT) of carotoid arteries was also 40% reduced among those restricting calories for a long-term.  Given the findings from this study, it’s reasonable to suggest that long-term caloric restriction may protect against atherosclerosis.

For general health, it’s better to have balance between the SNS and PNS – rather than dominance of one over the other.  Analysis by the aforementioned researchers discovered that restricting calories by 12.5% plus increasing energy expenditure by 12.5% significantly improved autonomic function – as evidenced by favorable changes in heart-rate variability (HRV).

Furthermore, a study by Griffioen, Rothman, Ladenheim, et al. (2012) discovered that caloric restriction prevented autonomic dysfunction within the brainstems of mice.  Specifically, caloric restriction inhibited accumulation of alpha-synuclein in the brainstem, thereby preventing against Parkinson’s disease-like symptoms.  Based on these results, researchers hypothesized that restricting calories would favorably modulate autonomic activity within humans.

Cognitive enhancement: Research shows that restriction of calories typically improves cognitive abilities – and overall brain function.  Because calories are restricted on low calorie diets, it’s reasonable to expect improved cognition after long-term maintenance.  A review by Gillette-Guyonnet & Vellas (2008) indicated that caloric restriction is linked to decreased neuroinflammation, reduced oxidative stress, synaptogenesis, and favorable modulation of neurotrophic/neuroprotective mechanisms (such as BDNF to promote neurogenesis).  In other words, by restricting calories, your brain should work better and be less susceptible to neurodegeneration.

Longevity: Research in simple organisms and animals universally demonstrates that caloric restriction increases lifespan and health span.  Because calorie restriction prevents autonomic decline/dysfunction, enhances immune function, protects against cognitive decline, reduces biomarkers associated with cardiovascular disease, and decreases cancer risk – it’s fair to assume that consumption of fewer calories would result in a longer lifespan (on average) in humans – compared to non-restriction.  Moreover, there are likely a host of direct mechanisms by which chronic caloric restriction delays the aging process.

Anyone with a modicum of logical thought would assume that, if caloric restriction favorably improves a host of physiologic functions and markedly decreases risk (or delays the onset) of many diseases, then it should promote longevity.  Researchers Cava and Fontana (2013) imply that caloric restriction has potential to increase longevity in humans via numerous mechanisms, however, further research is necessary in this niche.

A study by Lefevre, Redman, Heilbronn, et al. (2009) revealed that calorie restriction (with or without exercise) for a 6-month term favorably modulates lipid profiles and blood pressure in healthy non-obese persons.  Authors of this study concluded that, based on favorable biomarker changes, calorie restriction may decrease risk of cardiovascular disease.  Prior evidence indicates that long-term caloric restriction (3 to 15 years) significantly reduces ventricular stiffness and viscous loss of diastolic recoil – compared to healthy age-matched and sex-matched controls.

Overall, it’s relatively obvious that nutritionally-complete caloric restriction remains among the most effective methods for reducing risk of cardiovascular disease.

Inflammatory diseases:  A major benefit of sustained calorie restriction is that it decreases systemic inflammation.  Systemic inflammation interferes with immune function, brain function, and is associated with the onset and progression of many serious medical conditions such as: cancer, cardiovascular disease, depression, dementia, etc.  Most experts agree that reducing systemic inflammation, especially if chronic or significant, improves general health.

A meta-analysis conducted by Tsai & Waddden (2006) sought to compare the efficacy of low-calorie diets and very-low calorie diets for long-term weight management.  The aforementioned researchers assessed trials with randomized designs comparing LCDs to VLCDs – with participant follow-ups for a 1-year minimum post-weight loss.  A total of 6 trials met inclusion criteria set by the researchers for the meta-analysis.

Head-to-head comparisons revealed that very-low calorie diets resulted in significantly greater weight loss over a short-term than low calorie diets.  This finding shouldn’t surprise anyone, given the fact that those adhering to VLCDs eat fewer calories than those adhering to LCDs.  That said, there were no significant differences in total weight loss over a long-term among users of LCDs and VLCDs.

Because LCDs and VLCDs are each effective for the management of bodyweight over a long-term, I personally favor LCDs over VLCDs for weight loss.  There are several reasons why I’d recommend LCDs over VLCDs for individuals attempting to lose weight.  Keep in mind that these reasons are merely subjective.

If you’re overweight as evidenced by excessive body fat and/or an elevated BMI, it’s recommended to restrict calories until your weight drops to a healthy level.  Those who are overweight but not clinically obese will probably do better with a low-calorie diet than a very-low calorie diet.  Those who are clinically obese with obesity-related health complications may benefit more from a medically-sanctioned very-low calorie diet.

If you’ve ever used a low calorie diet (LCD) or very-low calorie diet (VLCD) for weight loss or general health, I’d love to hear about your experience in the comments section.  Mention some specifics such as:

For the past several weeks I’ve been using a low calorie diet to shed excessive body weight.  As of last month I was slightly “overweight” based on BMI measures and I could see (in the mirror) that I had too much adipose tissue – mostly from eating junk (non-nutritious) foods (e.g. Halloween candy).  I’ve been tracking my calories with a basic food scale and the free app “MyFitnessPal” – consuming between 1300 and 1800 calories daily depending on my appetite and activity level (I eat more calories if I go for a 20-25 minute jog).

I’ve been using the app to ensure that I’m getting an adequate amount of each major macronutrient (fats, carbs, proteins) – and I’ve been taking supplements (e.g. multivitamins) to ensure that I’m not significantly deficient in a particular micronutrient.  Though I found it difficult to follow a low-calorie diet in my first week, I’ve since had no major difficulty.  The biggest hurdle with a low calorie diet is largely psychological – you need to adapt to the feeling of hunger.

Furthermore, when I eat breakfast, I generally find that I get really hungry in the early afternoon – probably related to a glucose spike after my first meal, followed by a crash.  After just a few weeks of a low-calorie diet, my BMI is already well-within a healthy range for my height and I can see visible abdominal muscles in the mirror without flexing.  Although I’m “hungry” right now as I’m typing this article, the hunger isn’t that big of an issue – it’s something I can cope with.

I guess the most significant side effects for me have been: poorer cognitive performance (largely due to feelings of afternoon hunger), cold extremities (my body feels colder when eat less – especially in my hands), and infrequent bouts of orthostatic hypotension (probably due to “fasting” for most of the day).